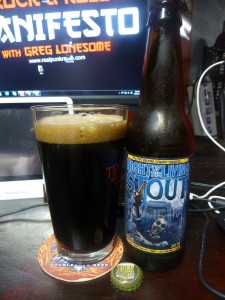 It’s that time of year: Halloween! Since I started the Manifesto I’ve done two of these Halloween shows every year, but I started to feel like I was running out of stuff to play, so I thought I’d cut it back to one this time. I might not even do one next year. I dunno. We’ll see.

That being said, I hope you enjoy this Halloween show. It’s mostly songs I’ve never played on a Halloween show before, though there were a couple of repeats at the end of the show because I needed to fill more time.

No Brats in Leather Jackets this week, but the Beer Minute fit in with the Halloween theme.

This show was especially cool for me because it was simulcast on terrestrial radio in Oakland, CA, on Berkeley Liberation Radio 104.1 FM. I had no idea that was going to happen, but it was a nice surprise! Thanks, Natasha!

Just a reminder, there will be no Manifesto on October 31st! I shall return on November 7th. Hope to see you then!