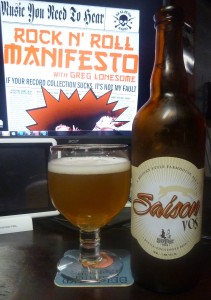 I attempted to do a show for Mother’s Day tonight, but something tells me it wasn’t one of my better shows. My apologies in advance. I also took a break from the theme to play the new Black Flag track, which also isn’t that great. I think people needed to hear it, though.

Other than that, the Beer Minute was a really nice Saison. In the news, the pre-order for shirts will be up for one more week and that’s it. I will be placing the order then.