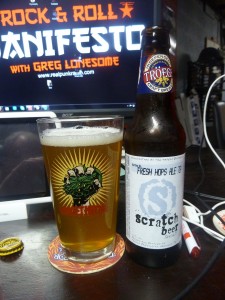 This felt like a big show. Was it? You be the judge. There surely was lots of new stuff: a reissue, some new releases, and some mind blowing stuff that was new to me, but not really new.  Top it off with some rockabilly, some Detroit proto-punk and Brats in Leather Jackets, and you have a jam packed show!

Tonight’s Beer Minute was a fresh hop ale from the great Tröegs brewery, who just won 3 gold medals at the Great American Beer Festival, along with winning the title of Mid Sized Brewery of the Year. Go Tröegs!