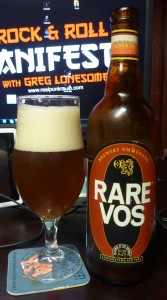 Episode 134 was another installment of Cover Your Ass, a show where I play original songs backed with a cover version. I almost didn’t do this show, but I think it turned out pretty good after some late tweaking to the playlist. Hopefully, you’ll think so, too.

The Beer Minute tonight was another great beer from Ommegang Brewery out of Cooperstown, NY.

Next week I will be back to the normal Manifesto format: no theme, no rules, just some kick ass music.